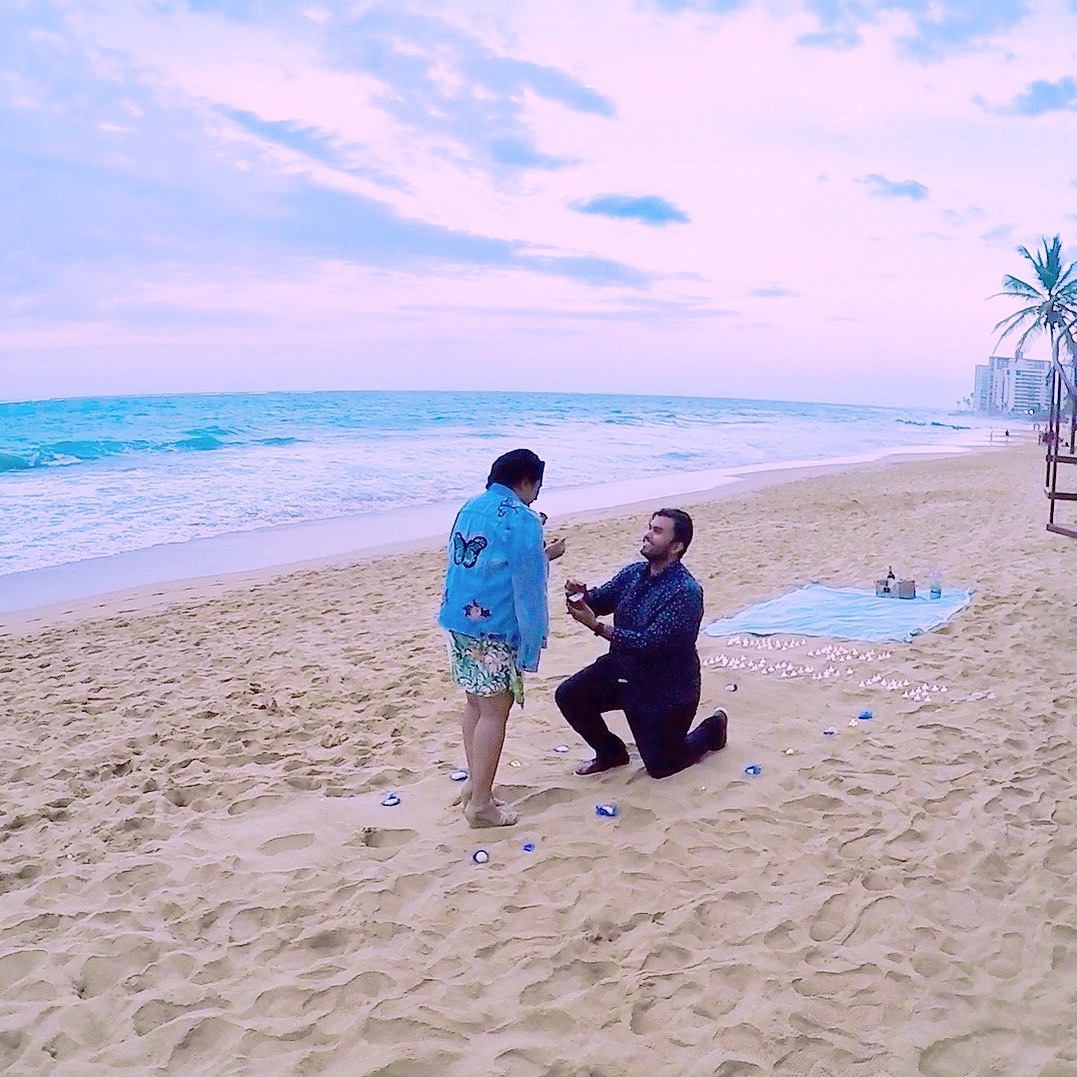 –
Honestly, y’all, I thought I was sooooo good with words. Until, the love of my life planned the proposal of my dreams and asked me to marry him! If you follow me on Insta, you probably saw my posts, but I really wanted to share the story of how he proposed because Anand (my fiance) can plan a heck of a surprise! For as long as I can remember, I’ve thought about how dreamy it would be if someone proposed to me on a beach at sunset! Anand and I had never talked about this. In fact, I think my best friend is the only person who knew about this, but I found out later that she’d never told him either. And yet, somehow, he managed to plan literally the perfect proposal!

We had a quick trip planned to Puerto Rico for my birthday, but Anand had told me the resort was going to be a surprise – it was his birthday gift to me. I love being surprised so I was already excited about this trip! When we got to the resort & were checking in, Anand told me to walk away for a bit because he’d gotten a particular type of room, and wanted to make sure that we were getting that room. I didn’t wanna be annoying & ruin the surprise he’d planned for me so, I walked away without asking any questions, not thinking much more of it. As we were walking to the room, I figured out he’d gotten an ocean-view room – I gasped & said “OMG ahhhh you got us an ocean view room?!” (This annoyed him because he didn’t want me to know till we were in the room). The view when we actually walked into the room was like 100x more spectacular than I’d even imagined! 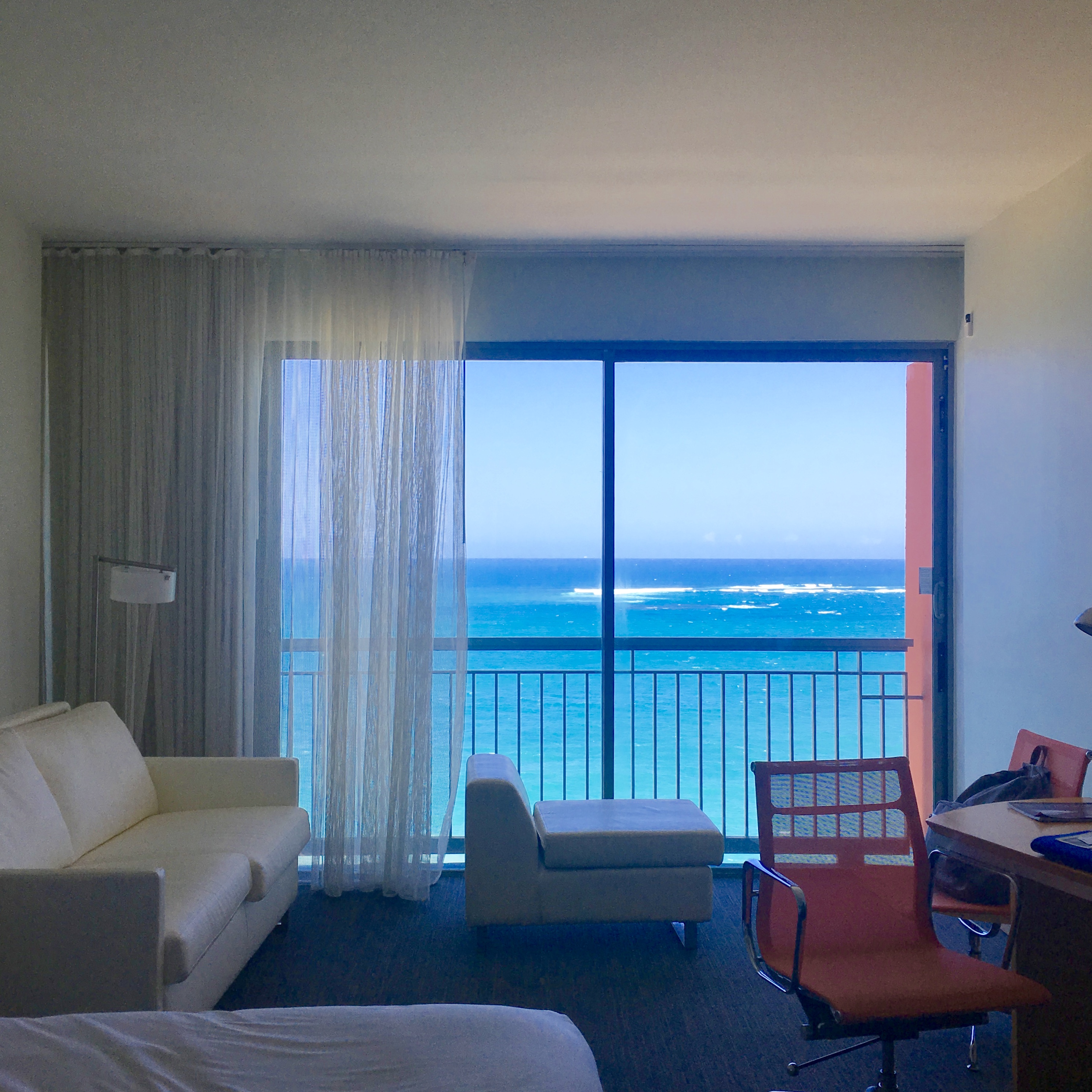 I mean, how sick is this view?

As I’d find out later, that was only the first surprise of the weekend! I was already floored because this was such an amazing birthday gift. Anyway, we went about our sightseeing plans for that day & then we went to Old San Juan the next day.

When we got back to the hotel after exploring OSJ the next day, Anand told me I needed to be ready by 5:45 pm for our dinner reservation at 7pm. I looked up how far the restaurant was from our hotel, and it was like 15 mins. When I asked Anand about it, he said “The lady told me once you get to the area, it’s tough to find the place.” and I said …. um, really? You’d need an extra hour to find the place? WTH! Obviously, he was getting a little annoyed & he said “We’re going to a dessert place before dinner, ok?” to which I, of course, said “Dessert before dinner? Really?” and he said “Yes! This place is a little different!” Oblivious as I clearly was, I thought “Eh, maybe it’s someplace where you make your own dessert and then bring it to the restaurant or something.” I wasn’t feeling great so I was being kind of lazy and around 5:15pm, Anand started to get really antsy.

Him: Babe, don’t you need to do your hair & stuff? We need to be ready at 5:45!
Me: Yea I’ll just put my hair in a bun!
Him: Really? This restaurant is really nice so I’m gonna wanna take some pictures. Are you sure you’ll be fine with your hair in a bun? (He wanted to make sure I would be ok with being photographed. Lol!)
Me: Yea yea I’ll make it a cute bun, it’s fine! I wasn’t feeling well & my throat was hurting so I couldn’t flip my hair over to make a bun. Hence, the braid (which he was happy about because he knew I probably would’ve hated the bun in pictures!)
Me: Shit, I think I forgot my makeup bag! Ugh!!
Him: Oh shit, really? (This, I thought was extremely weird, because he usually couldn’t care less about that.)

Anyway, I found my makeup bag & I was ready by 5:50 which he wasn’t prepared for. At this point, I was starting to get a little annoyed because now I was ready on time & he was stalling. This is also when I figured out he had something else planned (I still had NO idea he was gonna propose. I just thought he had a surprise planned for my birthday, at this dessert place he’d talked about or something). So, I decided to lay off of him & just said – “Ok, well, I really like my outfit. So, can we just go downstairs & take a picture while it’s still bright out? And then we can leave whenever you wanna leave.” He just stared at me & said “Oh, you mean now?” I remember being super confused like “wth is up with you, babe? Yea, now.“ 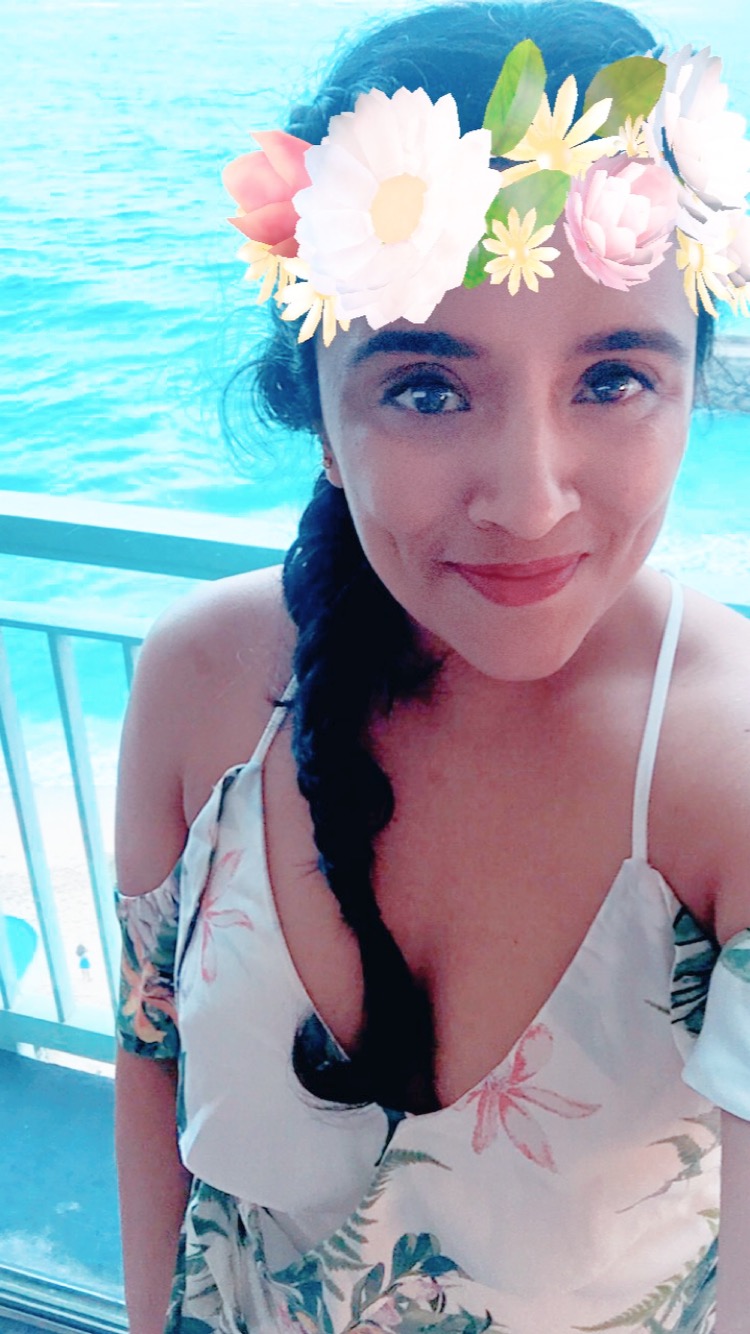 Clueless Snapchat selfies while I waited for Anand to be ready to go downstairs!

We walked out of the hotel room and as we were walking towards the elevator he goes “Oh crap, I forgot my wallet. I’ll be right back.” This is when, for a VERY brief moment, I thought – “OMG this is how it happens in movies & shows! Did he go back in to get the ring?” and I quickly talked myself out of it because I’m like “there is NO freakin’ way!” I mean, we’d talked about getting engaged and we’d looked at rings together, but I don’t know …. I just didn’t think it was gonna happen then. He came back out and we headed downstairs, and I wanted to head to the deck that was to the right of the elevator but he, of course, wanted to go left. So, I just went with it and when we got outside, he started walking me down to the beach and said “Come on, let’s go this way”; my exact words were “Um, babe, I’m not gonna walk on the sand in 5-inch wedges! Let’s just take a picture here” You guys, I was doing the absolute MOST to stress him out, totally unintentionally; ha! Anyway, he said “Just come on, you can wash those shoes off later”. I thought “Really? Wash them off? Oh Lord!” but …. I went with it.

As we were walking down the beach, he pointed out a beautiful picnic set-up & said – “I planned a little beach picnic for us!” and my exact words – “If you’re joking, I’m gonna beat you up, because that’s not funny!” because he tends to joke around quite a bit; and he said with the most serious look “I’m not joking. That’s for us”. I thought “OMG awww that’s what he’d planned for my birthday. How sweet is that!” – I was already grinning because, you guys, it was absolutely beautiful. And somehow, there was like nobody on that part of the beach, which only made it that much more special. As we were walking towards the picnic set up, a girl walked out with a GoPro & asked if she could take my bag from me. I wasn’t even thinking straight at this point, because I was super freakin’ emotional about this surprise. So, I just handed over my bag and she got behind us and was recording. I was STILL hella clueless …. no idea what was about to happen. Like I said, the fact that this was my birthday trip worked out 100% in his favor because I thought this was it …. this was my birthday surprise and we’d sit and have a little picnic on the beach.

It wasn’t until I walked right up to the picnic that I saw “WILL YOU MArrY ME?” (yep, with the two Rs spelled like that, hehe) in tea lights, in the sand …. and I COMPLETELY  lost it. 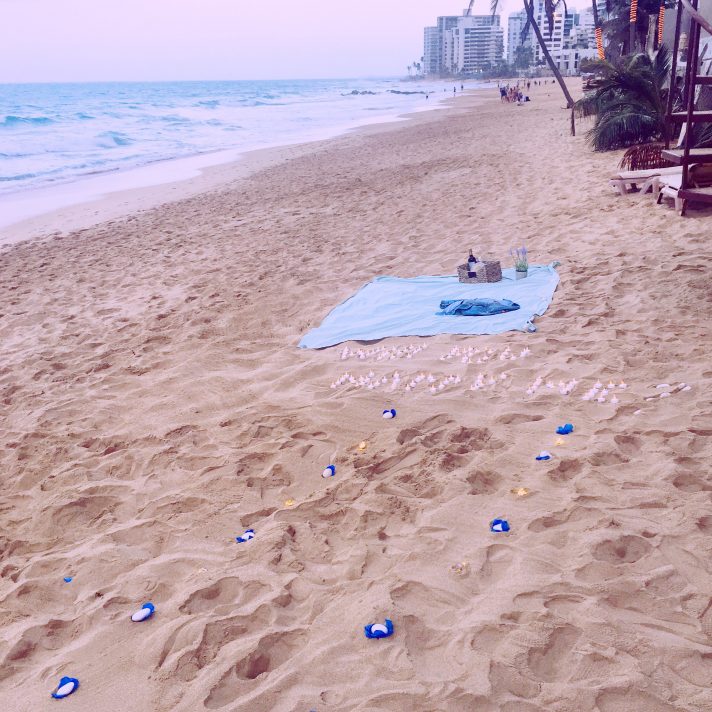 The girl who was recording us was at a distance so my reaction wasn’t captured on the video, but Anand said it was priceless &I was 100% surprised and I started crying hysterically right away. (Btw, when I realized what was happening, I was so annoyed that I had that stupid jacket over my shoulders so when the girl was recording from behind, my dress won’t even show!! But I figured Anand must already be super nervous so I didn’t wanna be like “babe, wait, let me take this jacket off” and throw him off. lol) And then Anand said some incredibly beautiful words, and got down on one knee, and asked me to marry him. Apparently, I said “YES!” very loudly and emphatically, because there were people in the hotel pool a little distance away from us and all of a sudden, I heard a bunch of people clapping and cheering; lol! We had about 15 minutes to enjoy the picnic – some wine & cheese, before it started raining! Lucky for us, the rain held out long enough for the proposal to go smoothly. 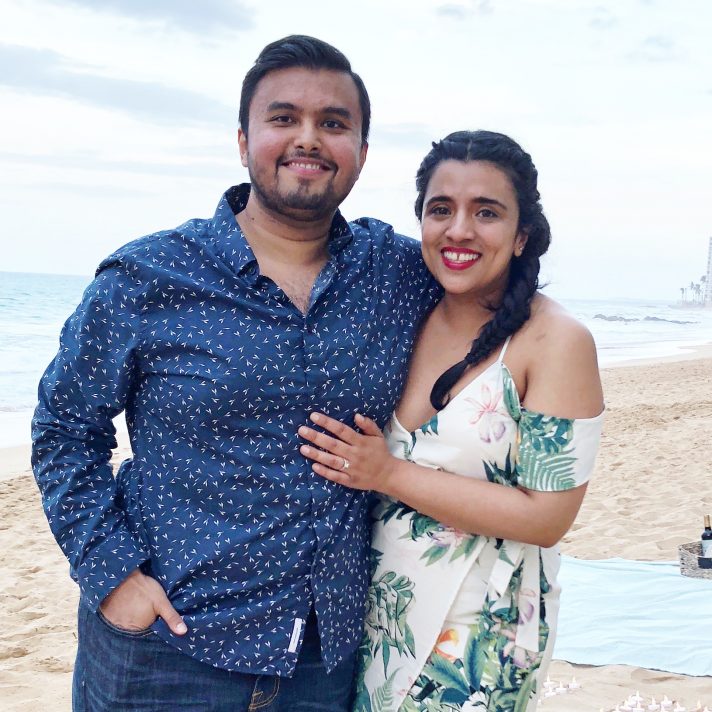 We called our parents and I called my bestie & then we headed back to the room because we still had some time left before we had to leave for dinner. Of course, I walked into yet another beautifully thought out surprise – while we were downstairs & Anand was proposing, he had someone bring champagne & chocolate covered strawberries to our room, and fill the room with balloons & flower petals!

And that’s how he proposed! I still look at the photos & that video on a weekly basis and it makes me grin! I want to thank Anand for planning the perfect surprise, and for the beautiful story he created for us!